4 of Wands (Deck: Tarot of the Divine by Yoshi Yoshitani)

The 4 of Wands is about celebration, and taking a break from your hard work to enjoy yourself. We sometimes get so caught up in our work or school or family obligations that we don’t take time to recognize what we’ve accomplished and celebrate that. It doesn’t have to be an elaborate ritual, just reward yourself with something fun because you deserve it. Let loose for an hour. Put on your favorite music and dance. Get a manicure. Get a massage. Whatever a reward for your hard work looks like to you. And don’t forget to include your friends. Celebrating with other people multiplies the positive energy and it becomes palpable. And when holidays or other dates of celebration come around, make a big deal out of it. Even if it’s just for yourself. Take any chance to celebrate life.

The 4 of Wands in the Tarot of the Divine deck is represented by Mohini and Aravan, a Hindu epic Mahabharata from Tamil India. 5 brothers were fighting with their cousins over the throne, and were about to go into battle. They were sorely outnumbered, and the god Krishna told them that one of them should sacrifice themselves in order to win the battle. One of the brothers, Aravan, volunteered. But he did not want to go to his death a bachelor. He wanted the crematory funerary rites of a married man instead of being buried like an unmarried man. No woman would marry him, though, because being a widow was very undesirable. So the god Krishna agreed to marry him in his female form, Mohini. They were married and spent the night together. And the next day during battle, Aravan was killed, but the brothers won the war. Their wedding day is still celebrated in parts of India today.

Celebration is a time of acknowledgement of some event or achievement. Take the time to celebrate. When occasions present themselves that deserve attention, don’t ignore them and go about your normal life. Celebrate. Live. Give thanks for being alive in whatever way you choose. It’s your celebration, you decide what to do with it. Don’t have a birthday cake if you don’t like cake just because it’s the way things are done. Celebrate in a way that’s meaningful to you. Go and be joyful! 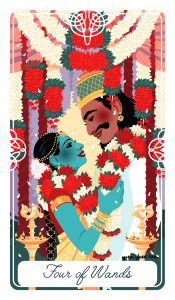