The Emperor (Deck: Tarot of the Divine by Yoshi Yoshitani)

The Emperor represents ultimate power and authority. He is the person you go to when you need a definitive answer. He is the manager, president, CEO of the tarot deck. Yes, this is stereotypical alpha male, but isn’t that what the tarot deck is? A collection of stereotypes? Emperor energy is forceful, yet tempered. He doesn’t explode or put people down. He directs and manages people in a way that uses their strengths and makes them feel successful. Like anyone in a power position, he may become overbearing and want to control everything. But a proper Emperor will realize he’s stepped over the line and put himself back into alignment with his true vision and mission.

In the Tarot of the Divine deck the Emperor is represented by the Celtic legend King Arthur of England. We all know the story of King Arthur. The young man who pulled the sword from the stone to become king, and his knights of the round table at Camelot. He ruled with compassion, justice, and mercy, with his queen Guinevere at his side. He conquered threats both physical and supernatural, and sent his knights on many quests, including that of the holy grail. In his last battle, he was mortally wounded by Mordred who was being aided by Arthur’s half sister Morgan le Fay. Arthur killed Mordred, but was taken away to Avalon while he was dying. Arthur was the pinnacle of Emperor energy. He was a perfect example for the Emperor in this deck. 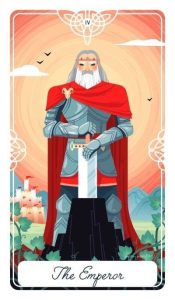