3 of Wands (Deck: Tarot of the Divine by Yoshi Yoshitani)

The 3 of Wands is about being fully prepared and ready to set out on your journey, whatever that may be. With the 2 of Wands we did our planning, now it’s time to put that plan into motion. Don’t get stuck here, just DO IT! Get out there and make things happen. It may go according to plan, it may not. Just go with it. Make adjustments as you progress down your path as obstacles and opportunities come your way. Nothing ever goes exactly as planned, so be flexible and open to new ideas.

The 3 of Wands in the Tarot of the Divine deck is represented by the Romanian fairy tale The Enchanted Pig. A king had 3 daughters, it was prophesied that 2 would marry princes and the 3rd would marry a pig. Yes, a pig. The 2 daughters did marry their princes, and when a pig came to the palace to request the hand of his daughter in marriage the king refused. Soon the city was overrun with pigs and he had to relent. The 3rd princess married the pig and went to his castle. Each night he turned into a man and visited her. She soon fell in love with him. She met a witch who told her to tie a thread to his foot to release the curse, but the witch was evil and it solidified the curse instead of breaking it. The pig ran away and the princess chased after him, all the way into the Milky Way where she had to make a ladder made of bones to reach him. She was one bone short so she cut off her finger to make the last bone, and rescued her husband whose curse was then broken. They then lived happily ever after.

This princess knew what she wanted and went after it. Are you doing the same? Do you have an action plan that just needs action? Are you stalling, coming up with excuses to not do it? You are the creator of your own destiny. You’ll never get anywhere unless you take that first step. So take that step and see where it takes you. 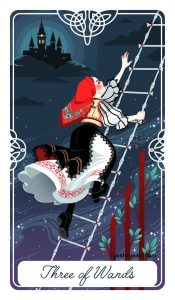