7 of Coins (Deck: Tarot of the Divine by Yoshi Yoshitani)

There’s an old saying, “You reap what you sow.” What that saying leaves out is that in the middle you have to tend and nurture what you sowed in order to reap the results. That is the essence of 7 of Coins energy. You can’t just throw seeds in the ground and expect to harvest weeks or months later. When we make plans, goals, or wishes, or cast a spell, plant a seed, or start a project, we need to give it the attention it needs to come to fruition. One of my teachers said “Do the magic, then act in accordance.” We are the magic. We are what makes things happen. The magic works through us. So plant those seeds, make those goals, then give them the attention and nurturing they need to grow.

In the Tarot of the Divine deck, the 7 of Coins is represented by the Aztec myth Nanahuatzin from Mexico. In the beginning the world was dark, so the gods decided someone needed to be the sun. Several gods volunteered and each took their turn, but ended up destroying the world with their power. So the gods decided someone needed to sacrifice their life to become the sun. They chose Tecciztecatl who was beautiful, wealthy and strong to be the sun, and Nanahuatzin who was ill, poor, and weak, to be the moon. Nanahuatzin made offerings, and Tecciztecatl didn’t want to be upstaged by the weaker god, made elaborate offerings. The time came for the sacrifice and Tecciztecatl was too afraid. So Nanahuatzin stepped up and jumped in the fire. Once again Tecciztecatl didn’t want to be upstaged so he jumped in after him. Two suns appeared in the sky. The gods were disgusted with Tecciztactl’s cowardice so threw a rabbit on his face. This dimmed his light and he became the moon. The sun was very hot so the gods created wind to blow the sun and moon through the sky, thus creating day and night. This represents the 7 of Coins well, each god getting what he deserved according to his actions.

What can you do today to harness the energy of the 7 of Coins? What goals have you set that need your attention? Nurture your seeds, make them healthy and strong. Do what needs to be done to make your wishes come true. Give the universe or Goddess the opportunity to work through you to make the magic happen. 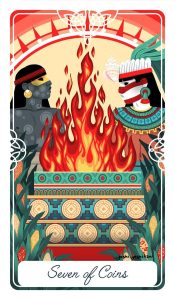