10 of Swords (Deck: Tarot of the Divine by Yoshi Yoshitani)

The 10 of Swords is about endings. Something in your life is coming to an end, as all things do eventually. Life cycles, just like the moon and the seasons, there is birth, life, and death, for every living thing. Our lives are no different. Things in our life begin, run their course, and end. Whether it’s a friendship, job, project, whatever. We need to accept that ending, or death, is a part of the life cycle and accept it graciously. The card typically shows a man lying on the ground with 10 knives in his back. So it can also mean someone is going to stab you in the back figuratively. Watch those around you, but don’t be so paranoid that you trust no one.

The 10 of Swords in the Tarot of the Divine deck is represented by the Inuit myth Sedna, from Canada, which is of the “stab in the back” variety. A man has a daughter who is very picky about who she is going to marry. A handsome stranger arrives and promises many gifts to the family in exchange for her hand. She agrees and goes off with the stranger, who ends up being a bird in disguise. He only brings her fish to eat, and she is unsatisfied with the relationship. Her father comes to visit and decides to take her home, so he kills the bird and they leave. On the trip back the bird’s family attack their small boat, creating a raging storm in revenge, so the father pushes his daughter overboard to appease them. She hangs onto the side of the boat so he cuts off her fingers and she sinks into the sea. Her fingers become whales and seals, and her hair grows long and entangles the creatures of the sea. She became a wrathful sea goddess who must be appeased by fishermen. “Stabbed in the back” by her own father. Great story, but being killed by your own father is the ultimate betrayal. He’s supposed to protect you, not kill you!

So take a look at your life. What is coming to its natural end? Somethings just run their course. But then, some things surprise you. Jobs and relationships sometimes end with no warning. Accept these things as part of the natural cycle of life and move on. Nothing lasts forever. And watch your back! 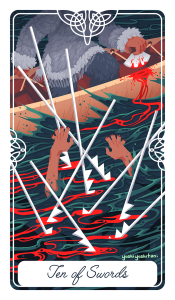