9 of Coins (Deck: Tarot of the Divine by Yoshi Yoshitani)

The 9 of Coins is about abundance. Do you feel like you have an abundant life? Or do you wish you had more “stuff” and resources? Here in the US, most of us have an abundant life compared to many other people in the world. We have cell phones, computers, internet, a house, a car, things that not everyone has. According to US standards, I live in poverty, but I have all these things and more. I am just wise with my resources. And that is the key to living abundantly. Being happy with what you have and using it wisely. Abundance is not having all the things. It is feeling like you have all that you need and more, and being grateful for all you have.

The 9 of Coins in the Tarot of the Divine deck is represented by the Legend of the Watermelon, a Vietnamese Legend. Once an orphan boy named Mai An Trem was in service to the king. He impressed the king so much that the king gave him his daughter to marry. A jealous courtier told the king that Mai An Trem was ungrateful and disrespectful of his generosity, so he banished Mai An Trem and his family to a desolate island. Mai An Trem was searching for water one day and found a watermelon. He discovered this satiated both his hunger and thirst. He took it to his family, and they planted the seeds from the watermelon. A ship came by and Mai An Trem sold them watermelons. Soon they had a prosperous business. The king heard about Mai An Trem’s success and realized that he had made a mistake. Mai An Trem was the resourceful person he had originally thought him to be. So the king brought the family back home to Vietnam and they were reunited. I love that story. It shows that if you want abundance in your life, you can make it happen. Even on a desolate island.

Do you feel abundant? Or do you feel lack? Are you grateful for what you have? Gratitude leads to a feeling of abundance. Practice gratitude every day. I started with stating 3 things that I was grateful for that day, out loud every night before I went to bed. This changed my outlook on life and I went to bed feeling satisfied and grateful instead of needy and worried. I slept better, and lived a better life. Try it! Be grateful for all that you have and soon you will realize you live an abundant life. 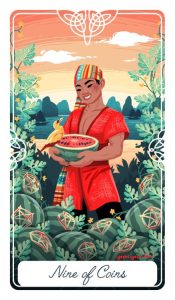