10 of Wands (Deck: Tarot of the Divine by Yoshi Yoshitani)

The 10 of Wands is typically a card about being overwhelmed or over-burdened. Could be with responsibilities, could be with guilt, could be with debt. Anything that has you feeling like you took on too much. Many of us do this because we have a hard time saying “No” when someone needs something from us. We want to help. But we need to be discerning and decline if our schedule is already full. I have an oracle card on my desk that says “I only say yes when it’s a holy hell yes.” Ask yourself when someone asks you to do something for them, is it a holy hell yes, or a maybe I could fit it in yes? If you are over-burdened with guilt, you need to let it out. Either talk to someone, like a therapist, or write it all down. Just get it out of your system somehow. We don’t need to live in guilt because of the past. Learn from the mistake and move on. My motto: Learn from the past. Live in the present. Plan for the future. So learn your lesson and let go.

The 10 of Wands in the Tarot of the Divine deck is represented by the Timbo Tree, a Guarani legend from Paraguay. Once a man who was the leader of his tribe allowed his only child, his beloved daughter, to marry a man from another tribe and move away. He missed her greatly, and never heard from her, so eventually went to the other village to see her. He found the village had been destroyed and all the people were gone. He went searching for her and kept putting his ear to the ground to see if he could hear anything. Months later he was found dead with his head to the ground with a tree growing out of his ear. When the tree grew to full-size it bore fruit that looked like human ears. The tree is still a symbol of a father’s undying love for his daughter.

If you’re feeling overwhelmed, take a look at your life and your activities. Is everything on your calendar and to do list a “holy hell yes”? If not, you need to rethink what you’re doing. Time management and life balance are passions of mine and I use several tools, both high tech and low tech, to make sure I don’t get overwhelmed and have a good balance between work, education, family, self-care, and spirituality. Use your tools. Find the balance. Be true to yourself, your own needs and those of your family, when you take on responsibilities. You CAN say “No.” 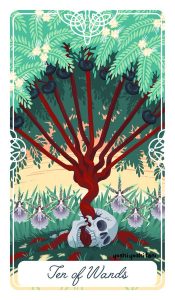