The World (Deck: Tarot of the Divine by Yoshi Yoshitani)

The World card. The end of this cycle. Fulfillment of your current hopes and dreams. But not the end of everything. We all go through cycles in life and this signals the end and fulfillment of one, but now you get to be the Fool and start a new journey. First, take time to enjoy and celebrate what you have accomplished. Whether that’s finding the perfect job, graduating from college, getting married, having your first baby. Whatever ultimate fulfillment looks like for you at this time in your life.

The World card in the Tarot of the Divine deck is represented by the Maori legend of Hinemoa and Tutanekai from New Zealand. Hinemoa was the chief’s daughter, and her father wanted her to marry well. But she had eyes only for Tutanekai, whose rank was too low for her father to consider him a suitor. They hatched a plan for Hinemoa to take a canoe during the night and cross the lake to Tutanekai who would guide her with his flute music. But her father had suspected something was up and pulled the canoes far inland each night. So she thought outside the box and thought of tying hollow gourds to her clothing to keep her afloat as she swam out to the island where Tutanekai lived. She followed the sound of the flute and made it to her beloved and they were married. The chief accepted their marriage and they lived happily ever after.

Take the time to revel in your success. Savor the feeling of accomplishment you feel now. You’ve earned it. You have the whole World to choose from for your next adventure. What will you choose? 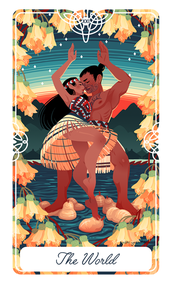