King of Swords (Deck: Tarot of the Divine by Yoshi Yoshitani)

The King of Swords is master of battle with both words and weapons. He acts on instinct, letting his intuition guide him to make the right moves. He’s also the man with the plan. He’s looked at all the possibilities and prepared for them. However, he plans up to a point, then lets his intuition guide him from that point on, because even he knows a plan never works out exactly as you expect it to. So he may have planned for any eventuality, but he’s a master at switching gears and going with the flow when things deviate from the plan. He is often found in positions of authority and is a hard task-master. He demands perfection from his employees and can be brutal when his expectations aren’t met. When confronted, he doesn’t pull his punches or hold back. He expresses his position on the matter with great surety. So watch out for this King with his double-edged sword. He’s smart, he’s eloquent, he’s ready for action, and will fight for what he believes in.

In the Tarot of the Divine deck, the King of Swords is represented by the Griffin, a Persian mythological creature, though the myth of the Griffin is found all over Asia and Europe. Griffins are half lion, half eagle, both kings of their respective animal worlds. They represent wisdom and strength, and parts of their body have medicinal properties. Griffins are monogamous. They mate for life, and don’t take a new mate if theirs dies. So they also represent devotion and loyalty. Because they are a mixture of sky and land animals, they are a connection between earth and air, heaven and earth, the divine and human. They are often depicted as the creatures that pull Apollo’s chariot as he leads the sun across the sky each day.

How can you use the energy of the King of Swords in your life today? Do you need to start planning ahead, being prepared? Do you need to watch your words and speak only your truth, but in a tactful and gracious way? Do you need to be more like the griffin, loyal and devoted? Be strong, but be kind. 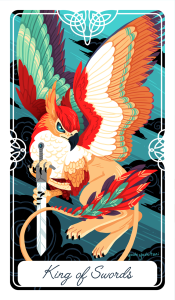