9 of Swords (Deck: Tarot of the Divine by Yoshi Yoshitani)

The 9 of Swords is about anxiety, nightmares, and acting out of fear. As humans, we spent thousands of years being fearful of our environment and the predators in it. We developed a fear response which includes a rush of adrenaline to help us fight or flight. In modern times, we aren’t usually fighting for our lives against an animal predator, but situations still come up that make us afraid. Sometimes those situations are valid, such as domestic violence, violent crime, and bullying, and the adrenaline response is appropriate. However, many of us have developed fears and anxieties that don’t require an adrenaline rush to overcome. Yet we still feel that fear in the pit of our stomach, all our muscles tense up, and our thoughts go into overdrive, trying to find a way out. We’ll go over strategies to overcome this after we look at the card for this deck.

In the Tarot of the Divine, the 9 of Swords is represented by the Greek myth Oedipus. King Laius and Queen Jocasta of Thebes were childless for many years. When the queen finally got pregnant, they consulted the Oracle at Delphi about their child. It was prophesied that the child would kill his father and marry his mother. The kind reacted out of fear and ordered the child be left on a mountain with his ankles tethered so he couldn’t get away. The servant given this task felt sorry for the baby and gave him to a shepherd, who passed him on to the childless King Polybus and Queen Merope of Corinth. They raised him as their own. One day the child, whom they named Oedipus, met King Laius on the road. They had a confrontation and Oedipus killed him. It was declared that any man who could defeat the deadly Sphinx could marry the widowed Jocasta. Oedipus answered the Sphinx’s riddle and married his mother. Years later a plague struck Thebes and they consulted the Oracle at Delphi again. The oracle told them that to end the plague, the murderer of King Laius must be brought to justice. In the investigation, it was discovered that Oedipus was the murderer. In anguish he stabbed his own eyes out and wandered the world blind for the rest of his life. King Laius acted out of fear, and it came back to bite him in the behind. Decisions made out of fear often do.

How can you overcome anxiety in your own life? I have many years of experience with this, suffering from chronic anxiety myself, and have used various techniques. The best is breathing deeply. Breathe in slowly through your nose to the count of 5, hold it for a count of 5, then breathe out through your mouth for the count of 5, and then hold for the count of 5. Repeat 5 times. This resets your brain and typically puts an end to the adrenaline response. Unfortunately, in the moment, I don’t always remember to do this. So my backup response is to call someone on my support team. They remind me to breathe and help me talk through it. Usually through talking it out, I realize it isn’t worth getting worked up over and am able to think about it rationally. Meditation is a good preventative strategy. The more we can calm our minds to meditate, the better we are at calming our minds when the anxiety hits. Start with 5 minutes a day and work up to 30, first thing in the morning when you get up if possible. There are many meditation methods, research them and pick the best one for you. The best thing is, all of these strategies are free. You don’t have to pay for expensive medications or a therapist (though therapy can help immensely) to try these methods. Remember you are strong and you can overcome this. 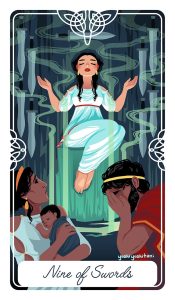