The Star (Deck: Tarot of the Divine by Yoshi Yoshitani)

The Star is the faint light in the darkness that gives us hope and direction. How many of us have wished on a star at some point in our life? Probably most. “Star light, star bright, first (or brightest) star I see tonight. I wish I may, I wish I might, have the wish I wish tonight.” I’ve always loved looking at the stars. I knew there were constellations up there, and I knew a few, but I also made up my own. One in particular became “My” constellation and when I saw it I felt comfort. When I moved from the big city to the country, I looked up at the sky at night and was overcome with awe for the number of stars that I could see without light pollution. It was amazing.

The Star card in the Tarot of the Divine deck is represented by the Russian fairy tale Sister Alyonushka and Brother Ivanushka. A girl and her brother were walking together through the woods and the boy was thirsty and kept wanting to drink from hoofprints in the road that were filled with water. The girl kept telling him no, to wait until they got to town and the well. He ignored her advice and drank from a goat’s hoofprint. The water was an evil witch’s trick and he was transformed into a goat. She sat on the side of the road with the baby goat crying and vowed to always take care of him. A merchant drove by and saw her crying. He asked her what happened and she told him the story. He fell in love with her and they were married. One day the evil witch kidnapped the girl and threw her in the river, tied up and weighed down by stones. The evil witch made herself look like the girl and took her place at the home. But the brother-turned-goat led the husband to the river to save his real sister. They then killed the witch and the spell was broken. The goat transformed back into a boy. The girl never gave up on her brother. She took care of him no matter what. That’s what The Star card is about – never giving up, always having hope.

How can you use the energy of The Star card in your life? Are you in a hopeless situation and don’t know the way out? Look up at the stars. Think about how big the universe is and how small we are, and maybe your problems won’t seem so big anymore. That’s worked for me a few times. Pick a star that is just for you, your own special star (or constellation), and find that star anytime you’re out at night. It will bring you comfort, like mine does for me. 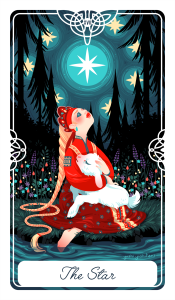