5 of Wands (Deck: Tarot of the Divine by Yoshi Yoshitani)

The 5 of Wands is about competition. There are different types of competition and its meaning depends on its placement in the spread and the cards around it. There’s healthy, fun competition like sports and games, and then there’s real life competition. Competing for a promotion is never fun and games. Take mom’s advice and do your best and if you win, great, if you don’t, congratulate the person who did. Don’t be a sore loser, or a gloating winner. Competition is good for us because it pushes us to do our best. Just don’t go overboard and feel like you have to win every time. There’s always one winner, and usually multiple losers. You can’t win every time.

The 5 of Wands in the Tarot of the Divine deck is represented by The Pandavas, a Hindu epic from India, which is definitely a story of unhealthy competition! King Pandu caught his wife and sage making love in the form of deer and “accidentally” shot them. The sage cursed him with his dying breath that if he ever loved a woman he would die. The king had no sons so he took his 2 other wives into exile with him. He asked the gods to father children on his wives, which they did, and they had 5 boys known as the Pandavas. They retake half of their kingdom and make it so bountiful that the son of the old king’s brother became jealous and tricked him into exile. When they returned they waged war against their cousin and took the throne.

What kind of competitor are you? Are you a gracious winner and loser? Do you gloat or complain that it wasn’t fair? Check yourself next time you play a game or have any kind of competition and make sure you’re handling yourself in a gracious manner, worthy of a spiritual being. 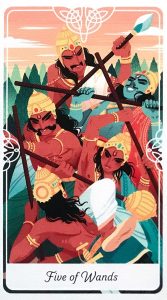