Knight of Coins (Deck: Tarot of the Divine by Yoshi Yoshitani)

Like his other Knight brothers, the Knight of Coins is a man on a mission… but with a plan. He takes his mission very seriously and meticulously plans out the details before he begins. His motto is “Slow and steady wins the race.” He’s dependable, practical, and efficient. If you want a project done right, but not right away, he’s the man to ask. He’ll make sure everything is done properly, including all the nitty gritty details.

The Knight of Coins in the Tarot of the Divine deck is represented by the South African Khoikhoi deity Heitsi-Eibib. Heitsi-Eibib was born from a cow who ate magical grass. He helped all the animals find their proper place in the world. Fish in the water, animals on the ground, etc. Once a monster was tormenting a village. The monster dug a pit and waited for the people to come to him. He would taunt people who came to the pit to throw rocks at him, but the rocks reflected off him and hit the person who threw them and they would fall in the pit. The village asked Heitsi-Eibib for help, so he went to the pit. The monster taunted Heitsi-Eibib to throw rocks at him, but instead he shouted “What is that?” and when the monster turned to look, he hit him on the head and the monster fell in his own pit and died.

How can you use Knight of Coins energy in your life today? Take time to plan out your strategy before beginning a project. Look at the different angles to a problem, and think outside the box. Be patient and wait for things to come to you. Work hard and take your time and you will be rewarded with success. 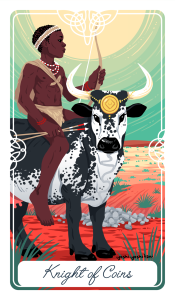