4 of Swords (Deck: Tarot of the Divine by Yoshi Yoshitani)

The 4 of Swords is the card of rest. Sometimes in the midst of battle, whether you’re in the middle ages battling with swords, or in the modern day battling with email and money, you have to take a break. Occasionally this rest is forced upon us by some illness (covid, anyone?), injury or another person. It’s best to take that break when we feel we need it, or even before then, on a regular basis, to keep your pump primed. If you are busy busy busy all the time, you will burn out. You need to take time for rest and self-care to fill your cup, so you can either go back out to battle, or help others. You can’t work with an empty cup, so fill it up with rest and self-care.

The 4 of Swords in the Tarot of the Divine deck is represented by Fenrir from Norse mythology. Fenrir was the child of the trickster god Loki and a troll. He was more powerful than anyone or anything. It was prophesied that he would overthrow Odin and cause Ragnarok, the end of the world. They tricked him into being bound so that he could not cause the end of the world, or harm anyone. He will remain bound until he finds a way to get free, and then will cause the end of the world in retaliation for his many years of imprisonment. That’s a self-fulfilling prophecy for sure!

Don’t wait until you are forced to rest by sickness or injury. Take regular time for yourself. That’s why we have weekends! Don’t spend the whole weekend (or whatever days you have off work) being just as busy as you are during the week. Take some time to chill. Watch a movie with your kids or your friends. Take a nap. Read a book. Take a bubble bath. Whatever makes you feel recharged and ready to take on another week of battle in the workplace. 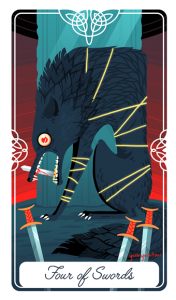 Ashke Aylesbury (aka majkmom) has been reading Tarot since 2017. Ashke is a student at Wooston-Steen Theological Seminary, and a Dedicant of the WISE tradition of Wicca, studying with Trisha Parker and Eric Goodrich. Ashke also has a Bachelor's Degree from SUU and is the parent to 4 amazing children and grandparent to 5 adorable grandchildren. Ashke's professional page can be found at majkmom.com.