Page of Swords (Deck: Tarot of the Divine by Yoshi Yoshitani)

The Page of Swords represents youthful intelligence. They may be a student of the academic arts. They may be a thoughtful person who soaks in information like a sponge. You can count on them to know the answer or know how to find the answer to any question. They may have new ideas and methods to try when others fail. They think inside the box, outside the box, on the box, around the box. The box is not a hindrance to them.

The Page of Swords in the Tarot of the Divine deck is represented by Princess Parizade an Arabian folktale from Anatolia. A Queen gives birth two 3 children, 2 princes and a princess. Her jealous sisters steal the children at birth and put them on the river, telling the Sultan the Queen gave birth to a dog, a cat, and a stick. He imprisons his wife, and the children were found and raised by the royal gardener. Parizade heard about 3 magical objects and was determined to go find them, but her brothers wouldn’t let her and went out instead. They were told not to look back no matter what, but they heard taunting voices and looked back and were turned to stone. Parizade followed them and put wax in her ears so she wouldn’t hear the taunting. She found the magical objects, one of which cured her brothers, and they returned to the royal garden. The talking bird they found helped her convince the Sultan that they were really his children, and the whole family was reunited.

How can you think outside the box today? What new idea is churning around inside your head. Spend some time in thought today. Your mind is a marvelous thing, don’t waste it. Use it to generate magic in all that you do. If you’re at a stand still, not sure what to do next, stare at the object you are having problems with, then meditate on it and wait for inspiration. Go discover new things! I can’t wait to see what you come up with! 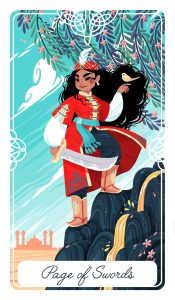