King of Wands (Deck: Tarot of the Divine by Yoshi Yoshitani)

Second only to the Emperor, the King of Wands is the powerful leader of the tarot deck. He’s charismatic and passionate about what he does. He gives his all to his endeavors. Like Yoda says to Luke “Do or do not, there is no try.” When he says he’s going to do something, it gets done. He makes an inspiring leader, no doubt. However, sometimes he takes things too far and can be overbearing, and take advantage of those weaker than him. But there’s no denying his appeal, and if you need a leader that people will be attracted to and follow, he’s your man.

In the Tarot of the Divine deck, the King of Wands is represented by the East Asian myth of the Phoenix. The idea of the Phoenix dying and rising from the ashes is a universal concept at this point, but may have originated in East Asia. The Phoenix is beautiful and powerful, like our King of Wands. Its feathers hold great power, for both good fortune and destruction. As it flies across the world, it drips pearls from its beak for the poor and needy. Every thousand years, the Phoenix makes a nest of myrrh and cinnamon and dies in a burst of flame. A new egg is formed in the ashes, and a new Phoenix rises to take its place. In China, the Phoenix is one of the 4 constellations depicting the 4 cardinal directions. It is the firebird of the south and associated with summer. The Phoenix is found in modern myth too, in popular stories like Harry Potter and the X-Men.

How can we use the energy of the King of Wands to energize our own lives? We are all powerful beings, capable of great things. We just have to apply ourselves. Just do it! Use his energy to drive your ambition to succeed. Feel that King of Wands energy fill you with the passion to accomplish your goals. You got this! 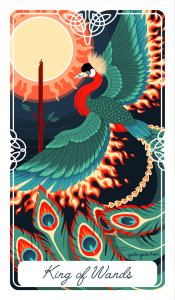