The Hierophant (Deck: Tarot of the Divine by Yoshi Yoshitani)

The Hierophant, at his/her best, is the spiritual teacher and leader of the tarot deck. They impart divine knowledge upon those who request teaching and instruction. They are the guardians of the way to the afterworld, providing spiritual advice to earthly travelers on what to expect in the next life. They give messages of hope and faith and love, and act as a guide to moral and ethical behavior. They can also represent organized religion and faith-based institutions, in some decks and readings.

In the Tarot of the Divine deck, the Hierophant is represented by the White Buffalo Woman, a Lakota Deity from North Dakota in the US. The Lakota tribe was starving. The chief sent out scouts to find game every day, sending them further and further out, but they could find nothing. Finally, a beautiful young woman dressed in white appeared to the scouts, floating in the air instead of walking. She told the scout to go inform his tribe that she was coming and to prepare for her. 4 days later she came to them as a white buffalo. She rolled over 4 times, each time becoming a different color, and then finally she became the woman the scout had seen. She taught them sacred ceremonies, songs, and dances, and council on how to live. She taught them about the sacred pipe, and their roles in the circle of life. Then she rolled on the ground again, turned into the white buffalo, and left. After she left, a herd of buffalo appeared and the tribe had all the game they needed to live. This was an excellent example of a spiritual advisor for the Hierophant card.

Who is the Hierophant in your life? Do you have a spiritual teacher or advisor? If you don’t, and would like one, let the universe know that you’re ready and someone may be sent to you. But the most important spiritual advice is that of our own hearts. Meditate and listen to your own intuition. Ultimately, only you can decide what is right and wrong, good and bad, moral and immoral for you and your life. Walking your spiritual path alone is sometimes necessary, but walking the path with others who believe as you do is very rewarding and fulfilling. If you desire this in your life, decide what your morals and values are, then look around for someone living those values. Ask them about their spiritual path. They will probably be happy to share with you. If that path doesn’t appeal to you, look again. There are many paths out there, and they all lead to the same place. 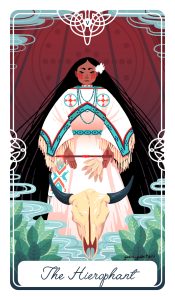