7 The Chariot (Deck: Tarot of the Divine by Yoshi Yoshitani)

The Chariot is a card of action, of moving forward. You know, all those things you’ve been meaning to do? Do them! Be brave, be bold, do all the things! Or just pick one thing you’ve been procrastinating and go for it. The chariot is lead by 2 fish in this image, half black, half white. There is light and dark in every action we take. When we choose one action, we choose not to take a different action. And each action leads further down our path. The chariot (boat) driver has no reigns. He is leading the fish with pure will. Exercise that will chakra and get things done!

The Chariot in Tarot of the Divine is represented by the Norwegian Fairy Tale, The Three Princesses of Whiteland. A man is tricked into giving his unborn son to a fish in exchange for a good catch, but hides the boy away from the ocean after he is born. Eventually, the lure of the sea is too strong and the boy goes to the ocean. He is whisked away to a place called Whiteland where he meets 3 princesses, and marries the youngest and most beautiful. But in time, he misses his parents and asks to go see them. He is told to obey his father and not listen to his mother’s wishes. Inevitably he listens to his mother, and disaster strikes. His princess abandons him on land and he doesn’t know how to get back to Whiteland. He never gives up, though, asking every living creature where he can find Whiteland. Finally he is taken there by a fish and is reunited with his princess, right before she was about to marry another. I see the Chariot in his determination to find his princess again. He never gives up, keeps trying to find her, and is rewarded for his efforts.

What can you do today that will take you closer to your goals? How can you move forward down your path? Imbolc is coming up, and each year at Imbolc we set goals for the year. Perhaps today is a good day to start working on those goals.

-MAJK Mom
(Resource: Beneath the Moon by Yoshi Yoshitani) 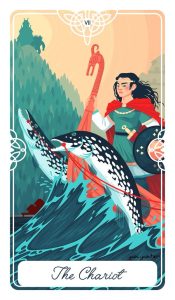