8 of Coins (Deck: Tarot of the Divine by Yoshi Yoshitani)

Today’s card, the 8 of Coins, is about hard work and perseverance. When the going gets tough, the tough keep going, right? You’re almost done with that project, the end is in sight, but there’s still some work to do to get there, so don’t stop now! Keep up your momentum and achieve that goal!

The story of the image on the card is The Six Swans. It’s a German folktale that describes a girl with 6 brothers that were turned into swans by a jealous stepmother. In order to turn them back into human, the girl must weave them each a shirt out of nettles, without speaking a word to anyone. A neighboring king falls in love with her beauty, but she still won’t speak. She continues working on the shirts. She is accused of being a witch and they were going to burn her. She kept working up until the last minute, and then gave the shirts to her brothers, the last one not quite finished, missing the arms. The brothers turn back to human, one still with swan wings instead of arms, and she is able to tell her story. The king cancels the burning and marries her instead and they live happily ever after.

The girl kept working, even though her life was literally at stake. No matter how hard life gets, we must keep going. We set goals each year at the New Year or Imbolc, and they require hard work and effort. Don’t give up if the work or circumstances become difficult. You can do this! Believe in yourself and your goals will become reality. 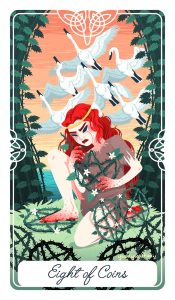