Ace of Swords (Deck: Tarot of the Divine by Yoshi Yoshitani)

The Ace of Cups is about new ideas. Have you recently had an idea for something, but haven’t acted on it yet? This is the time! Listen to your mind when it gives you inspiration, this comes from your intuition, from your subconscious, and it knows more than you do. It takes all the information you’ve ever learned and processes it in the background, then occasionally spits out an idea for you to pursue. Listen to that voice in your head that leads you to new things. It will lead you down the path of inspiration and innovation.

The Ace of Cups in the Tarot of the Divine deck is represented by Alexander the Great and the Gordian Knot, a Greek legend from Turkey. There was an ancient kingdom called Phrygia who didn’t have a king. They declared that the next man who came in the city with an oxcart would be king. That happened to be a farmer named Gordias so they made him king and called the city Gordium. He later became father to Midas of the golden touch. He tied his faithful oxcart which he dedicated to Zeus to a post with an intricate knot. It was prophesied that whoever could unravel the knot would rule Asia. Alexander the Great came along and instead of untying the knot, he sliced it in two with his sword. He thought outside the box, and became one of the greatest rulers ever seen.

If you get a crazy idea, it may be your subconscious thinking outside the box. Go with it. See where it takes you. Meditate on it and see if more details come to you. You can make new things happen in your life, if you just listen to your intuition. 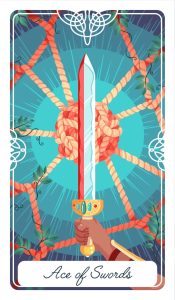