We have been exploring the concept of The Fool’s Journey – which is a story of a young hero encountering the Archetypes of Life’s Lessons through the Major Arcana of the Tarot.  Traditionally this story is told through the cards in numerological order – but in this series we are exploring an alternate order – through the Astrological Correspondences and the Wheel of the Year.

The Journey So Far:
Aquarius – The Star and The World
Pisces – The Moon, The Wheel, and The Hanged Man

Continuing onward with our Astrological Fool’s Journey, the Fool next encounters the lessons of Aries season. Previously, through Pisces Season, the Fool traveled through wilderness and was tasked with facing his fears through changing his perspective and trusting in fate or chance to bring them through anything. They continued on down the path and have next found themselves in a very busy, active kingdom.

The streets are filled with people who all seem to be quite focused on whatever it is they are doing. Vendors passionately selling their goods. Soldiers are single-mindedly running through drills and sharpening their skills. Artists are applying paint to canvas with fervor and reckless abandon. The Fool walks the streets – hardly noticed by any of the busy people – taking in the busy scene. They eventually find themselves at the doorway of a great hall – swept along by the busy crowd that enters the doors into a giant throne room.

There, at the front of the room, seated in a throne is the Emperor. A wizened man in armor, you can tell he has earned his seat of honor through experience. This is not simply a king who was born into a position of power – this is one who has earned it and has the scars to prove it. The Fool feels intimidated by The Emperor’s presence – not afraid of this leader but in awe of such a strong and direct force of nature. The Emperor isn’t cruel – but he knows that the choices he makes will have consequences and not everyone will be happy. 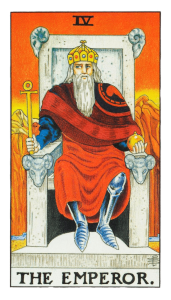 The Crowd gathers in front of their leader, who Welcomes them and begins to tell them stories of his youth. How his days as a young soldier taught him many lessons. With hard work and victory, his eventual promotions to higher rank brought more experience through leadership. He shares that even the battles he lost were valuable lessons of his own strength and resilience. The people listen and they are inspired. They take heed of his lessons – how he did not hesitate to go after what he most wanted in life and that his tenacity and confidence were his greatest strengths. The Fool is inspired as well, finding a fire within that responds to the very presence of the Emperor. The Emperor is the embodiment of Aries energy; Confident, Bold, Active, Impulsive, and Passionate. Just being in the presence of the Emperor feels activating – like you want to go out and prove yourself to the world, find your own success and power and inner strength.

The Fool recognizes that self-confidence is an important ingredient for success. And though they are just starting out on their journey and are still young and inexperienced – just meeting The Emperor and hearing his stories has sparked a new fire of passion, confidence, strength, and willpower in The Fool’s heart. The day goes on and the crowded hall turns into a party and feast, with everyone drinking and bragging – sharing their own stories of strength and success and their aspirations for greater success in the future. Feasting late into the night, everyone is wrapped up in dreams of their future conquests. 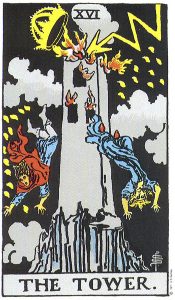 Suddenly and without warning, there is a booming crash, a flash of light, and part of the roof of the great hall collapses. There are screams as rocks fall and fire is burning. Smoke fills the air, along with confusion. People aren’t even really sure what has happened – but the building has been struck by lighting! As the adrenaline kicks in – the initial shock fades and some people burst into action. The Fool doesn’t really have time to think about what to do next, but finds themself running towards a pile of large stones. There are people trapped under the stones, and The Fool is compelled to act – pushing and pulling at the stones to help free the people who have been trapped. Other people have run to fetch water to begin to put out the fire.

Through the sudden conflict and terror of the moment – people find a strength that they did not know they had. Artists and Shopkeepers find themselves jumping into action to clear away rubble and put out fires. Adrenaline rushing through their bodies gives people strength and stamina they didn’t think their bodies had. And a sense of determination dominates the night – pushing people beyond fear and shock and into action and fight. This is The Tower – the Card of Mars. It is a sudden tragic event that rocks your world, but brings out strength and stamina that you didn’t know you had. It is an event that activates the inner warrior.

Yes, the great hall is in ruins and many people are injured – but it will be rebuilt, and the people here are forever changed – strengthened through the experience. They now relate to the stories that the Emperor shared – about how experience shaped him and strengthened him; even his losses and defeats. The Fool has been changed by this experience, has earned some confidence by seeing their own strength come out in a crisis. They were inspired by the stories of The Brave Emperor – and now they have found some of that Emperor’s strength and bravery within themselves.

The Emperor is the card of Aries – it shows us the strength and leadership and courage that the energy of Aries has when it is applied wisely. Of course, there are some who would take this power and strength and corrupt it – and we know many stories of corrupt and cruel emperors or warlords who have used the energy of Aries to destroy rather than build up. We all have a choice of what kind of Emperor we would become – what does our confidence and strength and willpower help us achieve?

The Tower is the card of Mars – the planet that rules both Aries and Scorpio. Mars is the planet of battle – and there are some things we can only learn through conflict and crisis. We can train for a fight the way that soldiers train for battle – but even they do not know how they will truly respond once the moment of crisis hits. And there are some who never trained for battle – who never wanted to fight – but when we are thrust into a sudden situation we have no choice but to respond. These are situations in which you will meet the inner warrior; the inner Mars.  We all have Tower Moments in our life.  And we all have potential to become The Emperor – while we might not lead armies we can develop leadership, win battles, and inspire others to be their very best.

Wishing you all the very best through the rest of Aries season!
~ Lilliana Blackstar, astrologer at www.hestiasmuse.net

Lilliana Blackstar is a practitioner and student of metaphysical and esoteric topics for 20 years and finds great joy in sharing and discussing spiritual topics with others. As an Astrologer, Tarot Card Reader, and Reiki Master, Lilliana has discovered a passion for helping others. Lilliana has studied Evolutionary Astrology and especially loves teaching others through mentorship and Astrology Workshops. A Graduate of Woolston-Steen Theological Seminary, Lilliana has earned her Bachelor’s Degree in Wiccan Ministry and is also a Dedicant of The Ever Green Hearth where she in training to become a Priestess in the WISE Tradition of Wicca.

Next Post: Pleasure and Preservation – The Fool’s Journey through Taurus Season