Strength (Deck: Tarot of the Divine by Yoshi Yoshitani)

Strength? Yes, please! I could use some of that now! The Strength card is about taming the wild beast. Whether that’s the wild beast inside of you, or outside of you, is determined by you individually. Are you fighting with self-doubt, feeling hopeless or worthless, not feeling like doing anything that you used to enjoy? If this is a temporary state, the energy of the Strength card can help you get through it. (If it’s chronic, see a doctor and therapist!) Have courage. Did you know courage isn’t a lack of fear? It’s actually acting in the face of fear. Doing what needs to be done even though we’re scared shitless. That’s courage. Fear is a natural state that our bodies go into when faced with a threat. It’s what keeps us alive and safe. It’s our internal warning system. “Danger, Will Robinson!” Listen to the fear, identify it, then make a plan and act on it.

In the Tarot of the Divine deck, the Strength card is represented by the Scottish fairy tale Tam Lin. Once upon a time there was a girl who took a shortcut (bad idea) through the forest and met a man so gorgeous he must be a fairy prince. She spent the entire night with him and had a wonderful time. A few months later she realized she was pregnant with his child. She went looking for him. When she found him, he told her he was Tam Lin, former owner of this estate, but that the fairy queen had captured him and he was no longer free. He said she could break the spell by waiting for him to ride by with the fairy queen and grab him off his horse and not let go no matter what. So she hid in the woods and did as he asked. The fairy queen turned him into all sorts of dangerous animals, many that the girl had ever heard of (or even existed). But she held on, and in the morning the spell was broken and the two were married and lived happily ever after.

Be strong. Hold on no matter what. Even if it scares you. Anything that doesn’t kill you only makes you stronger. You have the power within you to overcome any obstacle. Figure out how to overcome it and make a plan. You’ve got this. And the universe has your back. 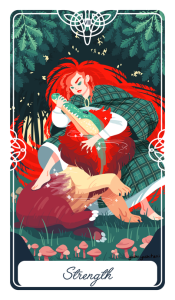 Previous Post: Pisces Season Tarot – The Fool’s Journey Through The Wheel of The Year