Knight of Swords (Deck: Tarot of the Divine by Yoshi Yoshitani)

The Knight of Swords is a smart, confident, strong warrior. He knows what his mission is and knows how to accomplish it. He tends to be single minded and not let anything distract him from his goal, moving quickly to achieve the desired results. He’s the “Get shit done” guy on your team, and he always delivers. Watch out though, he may be so focused on his goal that he doesn’t notice other things happening around him. So stay out of his way, and don’t interfere with his task. Wait til he’s done to talk to him about something else.

The Knight of Swords in the Tarot of the Divine deck is represented by the Malaysian legend Hang Tuah. Hang Tuah was the son of a woodcutter, but his natural gifts were evident from a young age. A teacher found him and taught him meditation and the arts of battle. His skills impressed the sultan and he entered the Sultan’s service His deeds became legendary. Hang Tuah is definitely an excellent representation of the Knight of Swords. To read more about his exploits, read the book Beneath the Moon by Yoshi Yoshitani.

How can you use the energy of the Knight of Swords today? Attack a project with single-minded purpose and determination? Good plan! Go get those things done on your to do list that you’ve been putting off? Also a good plan! Harness the energy of the card (if it will let you, the Knight of Swords doesn’t like to be harnessed!) and go get shit done! 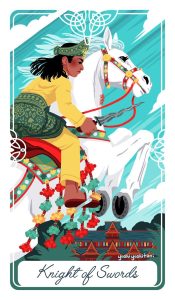 Next Post: Pisces Season Tarot – The Fool’s Journey Through The Wheel of The Year