4 of Cups (Deck: Tarot of the Divine by Yoshi Yoshitani)

The meaning of the 4 of Cups really depends on the cards around it in the spread. It can mean apathy, but also can mean introspection, meditation, and re-evaluation. I am in introspection right now. I am going through a process that requires much meditation and re-evaluation. So this was the perfect card for me today. We all need time to look inside ourselves and discover or re-discover who we really are. Take some time for this as often as you need to in order to stay in tune with your higher self.

Take some time to take an honest look at who you are, what you want, what you believe, and what your place is in this world. Meditate and journal on these things. Be completely open and honest with yourself. This is just for you, no one else. So open up and let it all out. You may be surprised at what you find within. 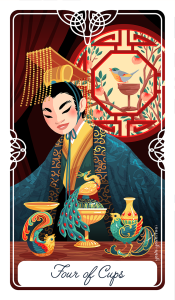