King of Cups (Deck: Tarot of the Divine by Yoshi Yoshitani)

The King of Cups is the master of emotions. He is the king who rules with wisdom and compassion, the father who raises his children with patience and love, the boss who manages his employees kindly and without pushing them to the point of exhaustion. He has learned that one has to feel the emotion, identify it, then work with it, not suppress it. He is an example of wisdom, devotion, faithfulness, and love to all around him. You can’t really aspire to be a King of Cups, it is something that comes naturally through time and experience. Only those who have felt all the emotions can truly understand them, so you know a King of Cups has known times of sorrow, anger, despair, but also love and understanding. He has been through it all and is a rock you can lean on during the hard times.

In the Tarot of the Divine deck, the King of Cups is represented by the Chinese legend The Boy and the Dragon Pearl. Dragons are the paragon of strength and good fortune in China. They are all powerful and can transform into any size from the smallest worm to as large as the universe. One day there was a boy who was living in a village during a drought. There was nothing to eat or drink, the crops wouldn’t grow, everyone was suffering. The boy saw a fat rabbit, and curious about how he got fat when times were so lean, he followed him. Outside his burrow was a patch of green flourishing grass. The boy dug it up and underneath found a pearl. He took the pearl home, thinking his mother could sell it. She put it in a rice jar for safe keeping overnight and the next morning, the rice jar was full of rice. The next night they put the pearl in an oil jar, and then a box of money. They had everything they needed. Unfortunately, this drew attention and men came to steal what they had. The boy swallowed the pearl. He became very thirsty. He drank all the water he could find and then plunged into the river. He emerged as a giant dragon. His mother realized what happened and came to visit him often. The dragon became a protector of the river. I’m not sure how this ties in with the King of Cups except that dragons are supposed to be wise and powerful. I like the card because I love dragons!

Do you have a King of Cups in your life? My grandfather was a King of Cups. He was loving, and fun, and gave his grandkids his full attention. He’d been through wars and famine and the crazy 60’s. He was always there when we needed a shoulder. He passed away many years ago, but I still remember him fondly. Count yourself lucky if you have a King of Cups in your life. They are a treasure greater than any pearl. How can you use this energy in your own life? Maybe you could be more understanding when someone is upset, or lend an ear or shoulder to someone who is grieving. One of my favorite country songs is by Tim McGraw, called “Humble and Kind.” We should all try to be humble and kind with each other. The world needs more of those people than it need skeptics and cynics. 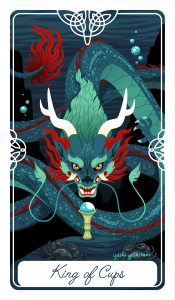