The Empress (Deck: Tarot of the Divine by Yoshi Yoshitani)

The Empress sits next to The Emperor (yesterday’s card), ruling over the tarot deck. She brings patience, understanding, compassion, and mercy to this leadership. She is the yin to his yang. She is often depicted pregnant, as the ultimate mother figure. She represents fertility and abundance. The Empress gives generously to those who come to her, whether it be for advice or material goods.

In the Tarot of the Divine deck, The Empress is represented by Our Lady of Guadalupe, a Catholic Saint from Mexico. A woman appeared to a peasant on a hill in Mexico, stating that she was the Virgin Mary and wanted the man to build a church for her on that hill. The man went to the archbishop, he was skeptical. The man went back to the hill, where he met her again and asked for a miracle. She told him to return to the hill the next day. He failed to do so, as he had to go visit his dying uncle. He went the next day, hanging his head, and found the hill covered with Castilian roses, native to Spain. He gathered the roses in his cloak and took it to the archbishop. The cloak not only contained the roses, but also bore the image of the woman. The man went to visit his uncle and found him fully healed. The archbishop accepted these miracles and built the church. The woman asked to be called Guadalupe. She is a symbol of peace, healing, and unity. To Christians, the Virgin Mary is the ultimate mother figure, and very appropriate for The Empress card in this deck.

Who is The Empress figure in your life? Your mother, grandmother, aunt? Who do you go to when you’re in need? Or do people come to you? Are you The Empress? How can you express the energy of The Empress in your life? Offer compassion and generosity to those around you, and you will begin to feel her energy within yourself. 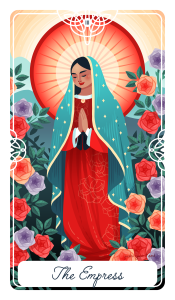