Knight of Wands (Deck: Tarot of the Divine by Yoshi Yoshitani)

The Knight of Wands is a man, or woman, on a mission. They’re passionate, creative, and fiery. They can flirt outrageously, but when it comes to their goals, they are single minded, focused, and move forward with intention and great charisma. When the Knight of Wands wants something, get out of their way! They will do whatever is necessary to accomplish their task, including running right over you in the process.

The Knight of Wands in the Tarot of the Divine is represented by the Norwegian fairy tale Tatterhood. A witch casts a fertility spell for a queen, but does not follow the witch’s instructions and gives birth to twin girls: one beautiful inside and out, and the other a wild child wearing a tattered cloak, holding a wooden spoon, and riding a goat. One day the beautiful sister has her head ripped off by a troll, so Tatterhood, the wild sister, takes her sister’s body and chases down the troll to retrieve the head and restore her sister, which she does. Then she goes to a neighboring kingdom and promises her sister’s hand to the king if the prince would marry herself. The king agreed, despite the protests of the prince, and Tatterhood was transformed into a beautiful princess like her sister.

How can you use the energy of the Knight of Wands in your life today? Do you have a creative project that you once felt passionate about but have been neglecting? Revisit that project and see if you can rekindle that fire. Is there someone you’ve had your eye on, but been too afraid to make a move? Flirt a little and see where it gets you. Be bold! Is there a cause you’re fighting for? Don’t back down! Stand your ground and push forward. You can do this! 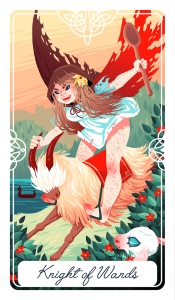