The Devil (Deck: Tarot of the Divine by Yoshi Yoshitani)

Like the Death card yesterday, The Devil card scares people when it comes up in a reading. It’s usually a large powerful, scary being and 2 people chained up. In this deck, it’s a snake weaving between bars of what could be a prison. Reminiscent of the Garden of Eden. I haven’t looked at the folktale for this card yet, excited to see what that means. The Devil card is typically interpreted as temptation or oppression, caused by one’s own actions. The Devil card is actually stalking me right now. It comes up in my readings for other people in the weirdest places in a spread, and I’m stretched to figure out what it means. I think it’s a message for me, but I haven’t figured it out yet.

The Devil card in the Tarot of the Divine deck is represented by the Brazilian myth, Boitata. Once there was a night that did not end. The sun did not rise. The crops would not grow, people grew hungry and died. Then it started to rain and many more died in the resulting flood. That’s when a large snake who had been slumbering on a log in the rain forest woke up. He could see fine in the dark, and began eating the eyes of all the dead people and animals. With each eye he ate, his own eyes became brighter and brighter until he was so brilliant that he became fire and banished the rain and night. Now Boitata is the protector of the rain forest and kills anyone who tries to set fire to the forest and eats their eyes.

The situation you find yourself in with The Devil is usually of your own making, and there is always a way out. Deny the temptation, find a way out of the oppression. Fight back, don’t just lie there and take it. You have it within you to overcome any obstacle, sometimes you just have to dig deep to find the courage to do so. 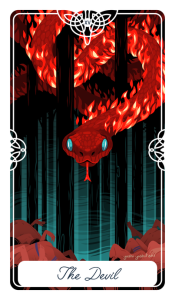