The Hermit (Deck: Tarot of the Divine by Yoshi Yoshitani)

The Hermit is the wise old person who has chosen to live a solitary life to contemplate the meaning of the universe. They don’t mind visitors, though, and freely share their wisdom with others. The Hermit may be a teacher in your life, someone you turn to for advice because they’re always right. They’ve been there, done that, and can tell you what to do. Sometimes their advice may seem cryptic or concealed within a story. It is up to you to unravel the mysteries of their words.

The Hermit in the Tarot of the Divine deck is represented by the Celtic legends from Ireland, Druids and the White Stag. The White Stag was an elusive animal that could not be caught, but represented messages from the underworld. It sometimes signals the beginning of a quest of some kind. The Druids were the leaders in the Celtic culture: religious leaders, legal authorities, and medical practitioners. They handled disputes between members of the tribe, and gave advice to the leaders of battle. This card just combines the two legends into one picture and gives information about them, including the story of Fionn mac Cumhaill. Fionn was a Celtic ruler who was killed by his rival. His wife, carrying his unborn child, ran to his sisters and had her baby with them. She left the baby there, also named Fionn, and he was raised to be a great warrior and Druid.

The Hermit can represent anyone in your life that imparts ageless wisdom. Sometimes that wisdom comes from the mouth of a child, but usually it comes from age and experience. We are all taught to listen to our Elders, and we should! They’ve been through things we can’t even imagine and can help us avoid obstacles that they dealt with in the past without having to learn the lesson personally. Though lessons learned yourself tend to stick more than advice given by another person. It’s just human nature. I’m sure you’ve experienced being told something isn’t a good idea and you do it anyway and regret it. We all do it. Some people are more hard-headed than others and have to do it more than once to learn the lesson. We all need to listen to The Hermit and we’ll avoid a lot of trouble! 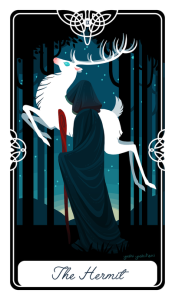